Francisco Morales Bermudez was born in 1921 in Lima, Peru. He is a former Peruvian General. He was one of the 1968 coup promoters that deposed President Belaúnde and established the Revolutionary Government of the Armed Forces, a military dictatorship which ran the country until 1980.

Under the military junta, he was Chief of Staff of the Army and became Commander in Chief of the Peruvian Army in 1974. In 1975 Morales Bermudez was appointed Prime Minister and Minister of War.

On 29 August 1974, he led the “Tacnazo”, a bloodless coup that removed General Velasco Alvarado and opened the “Second Phase” of the Revolutionary Government, under his presidency, between 1975 and 1980.

Morales Bermudez allegedly agreed to the involvement of Peru in Operation Condor in the late 1970s. In this context, he reportedly authorised in at least two occasions the capture and expulsion of Peruvian and Argentinian citizens, some of them with Italian nationality, accused of being active members of the Montoneros, an Argentine leftist urban guerrilla group. In particular:

Covered reports discovered in 1992 among the so-called Operation Condor’s “Archives of Terror” documented the infliction of torture, disappearance and killings on political opponents extradited to Argentina under the regime of Jorge Videla.

Proceedings against Francisco Morales Bermudez have been conducted in three different countries.

On 2 February 2012, an Argentinian Federal Court filed a request for the extradition of Morales Bermudez from Peru, in order to prosecute him for torture, kidnapping and criminal conspiracy, related to the arrest and transfer to Argentina of 13 Peruvian activists in 1978. On 29 March 2012, the Peruvian Supreme Court refused this extradition, considering that torture and criminal conspiracy did not amount to crimes under the Peruvian legislation at the time of their commission and that the crime of kidnapping was under the jurisdiction of Peruvian courts.

In 2006, the Prosecutor of Rome started investigations into the kidnappings and deaths of Italian citizens with dual nationality residing in Southern America. These investigations focused on persons linked to military and police actions related to Operation Condor.

On 28 December 2007, a request for extradition was filed by the Italian judiciary against Francisco Morales Bermudez, together Pedro Richter Prada and German Ruiz Figueroa. Once again, the Peruvian courts refused the extradition.

A trial started nonetheless in 2013. On 12 February 2015, the Italian Criminal Court in Rome brought charges against 33 former southern American high ranking officers, accused of murder or disappearance of 23 Italian citizens in the 1970s and 1980s. Francisco Morales Bermudez, Pedro Richter Prada and German Ruiz Figueroa were charged with kidnapping resulting in the death of two Italian citizens.

On 17 January 2017, Morales Bermudez was sentenced in absentia to life imprisonment by the Criminal Court in Rome. Richter Prada and Ruiz Figueroa were also sentenced to the same punishment.

‘Operation Condor’ was a secret plan adopted by the national armies of Argentina, Bolivia, Chile, Uruguay, Brazil and Paraguay aimed at the persecution and killing of leftist dissidents, including political opponents, unionists and students.

The plan, which initially involved the creation of an anti-terrorism communications network, was ideated on 28 November 1975 in Santiago Chile, during the First Conference of National Intelligence Services and agreed upon by representatives of the intelligence of Argentina (Jorge Casas), Bolivia (Carlos Mena), Chile (Manuel Contreras Sepúlveda), Uruguay (José Fons) and Paraguay (Benito Guanes Serrano). Despite not signing the foundational document, Brazilian authorities later agreed on and participated to the plan.

Operation Condor rapidly morphed into a brutal program of abduction, torture and murder which contributed to the disappearance of an estimated 50,000 nationals from the six countries combined. The integrated operation focused on all citizens who were deemed a threat, with secret police indiscriminately disappearing both active leftist dissidents and common citizens who may have expressed discontent with regimes in power at the time.

Within the context of Operation Condor, the coordinated repression passed through different phases.

In the first, a centralized database was created on guerrilla movements, left-wing parties and groups, trade unionists, religious groups, liberal politicians and supposed enemies of the authoritarian regimes involved in the operation.

In the second, people considered political enemies at the regional level were identified and attacked.

In the third and final phase, operations were conducted to track down and eliminate persons located in other countries in the Americas and Europe.

Declassified documentation available shows that various US government agencies had early knowledge of the scope of the repressive coordination and did not make much effort to stop it until it had reached the third phase.

In 1999, criminal proceedings for facts related to Operation Condor were initiated by Argentinian prosecution after several complaints were filed by some of the victims. The trial involved 17 former military officials:

All of them were accused of being part of a criminal conspiracy dedicated to the enforced disappearance of 105 people, among other crimes.

Separate proceedings involved Miguel Ángel Furci who was accused of illegally depriving the liberty of 67 people and torturing them while in captivity at the Automotores Orletti Clandestine Detention Center.

On 27 May 2016, Argentina’s Federal Tribunal No. 1 convicted all co-accused of conspiracy to forcibly disappear people, with the exceptions of Juan Avelino Rodríguez and Carlos Horacio Tragant who were acquitted. The court sentenced Santiago Omar Riveros and former Uruguayan military official Manuel Juan Cordero Piacentini to 25 years in prison. Reynaldo Benito Bignone and Rodolfo Emilio Feroglio to 20 years. Humberto José Ramón Lobaiza to 18 years. Antonio Vañek, Eugenio Guañabens Perelló and Enrique Braulio Olea to 13 years. Luis Sadi Pepa, Néstor Horacio Falcón, Eduardo Samuel Delío, Felipe Jorge Alespeiti and Carlos Humberto Caggiano Tedesco to 12 years. And Federico Antonio Minicucci was sentenced to 8 years in prison. All of the accused belonged to Argentina’s military forces with the exception of Cordero, who was extradited from Brazil for this trial.

In addition, the court sentenced Miguel Ángel Furci, a former Argentine intelligence agent, to 25 years in prison for being co-perpetrator of the crime of illegal deprivation of liberty, aggravated by violence and threats, committed against 67 people during their captivity in the clandestine detention center known as Automotores Orletti.

For the first time in history a court ruled that Operation Condor was a criminal conspiracy to forcibly disappear people across international borders. 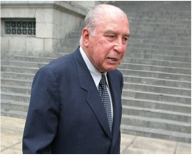 Fact Sheet
Name: Francisco Morales Bermudez
Nationality: Peruvian
Charges: Crimes against humanity, murder, kidnapping
Status: Convicted in Italy; ongoing investigations in Peru
Particulars: Request for extradition filed by Argentinian judiciary on 2 February 2012 but rejected on 29 March; charged in Peru with crimes against humanity on 10 September 2015 and with kidnapping in 2016; request for extradition filed by Italian judiciary on 28 December 2007 but rejected; charged with kidnapping and murder by the Italian Criminal Court in Rome on 12 February 2015; sentenced in Italy to life imprisonment on 17 January 2017

Guatemala
In 1986, Victor Hugo Soto Diéguez joined the Technical Investigations Department (DIT) of the former Guatemalan police. He then joined the Brigade on Special Instigations on Narcotics Trafficking, known under its Spanish acronym BIEN. In 1997, following the Peace Agreements signed in 1996...
News releases

Former Yugoslavia
Radomir Radovan Šušnjar, known as Lalco, was born in 1955 in Bosnia Herzegovina. He worked as a delivery driver for a bakery in the city of Višegrad before the war started. Šušnjar is suspected of participating in what has been called the “live bonfire” (“Živa lomača”) the burning alive of...
Reports and publications

Switzerland
Geneva, Bern, 4 August 2011 The Society for Threatened Peoples (STP) and TRIAL – Swiss Association against Impunity – filed today a criminal complaint with the Federal Attorney General against the former Major General Jagath Dias for war crimes. Although the STP and TRIAL have invited t...
View All
©2020 trialinternational.org | All rights reserved | Disclaimer | Statutes | Designed and Produced by ACW