Guillermo Benavides Moreno began his military career in the air force. As a lieutenant colonel in 1984, he was named commander of the Belloso Battalion and, later, commandant of the Miliary Detachment No.3 in La Unión. In 1987, he was appointed head of the Military Detachment No.5 in Cojutepeque. The following year, he was appointed chief of the Intelligence Union (C-2) of the Joint Military Command. He remained in this post for a year, before being name director of the Military Academy “Captán General Gerardo Barrios” on 1 June 1989.

From 1980 to 1992, El Salvador was divided by an internal armed conflict between the rebel Farabundo Martí National Liberation Front (FMLN) and the Government, led by the Nationalist Republican Alliance (ARENA).

In this context, on 16 November 1989, six Jesuit priests, a cook and her 16 years old daughter were killed at the Pastoral centre of José Simeón Cañas Central American University in San Salvador (UCA). The victims were Fathers Ignacio Ellacuría, Rector of the University; Ignacio Martín-Baró, Vice-Rector; Segundo Montes, Director of the Human Rights Institute; Armando López, Joaquín López y López and Juan Ramón Moreno, all teachers at UCA; and Elba Ramos and her daughter, Celina Ramos.

These murders were investigated by a Truth Commission, established during the Chapultepec Peace Accords in 1992. According to their findings, Colonel René Emilio Ponce gave Colonel Guillermo Alfredo Benavides the order to kill Father Ignacio Ellacuria and any potential witnesses.

On 16 November 1989, a group of soldier from the Atlacatl Battalion entered the Pastoral Centre of the UCA. The soldiers initially tried to force their way into the building, until the priests opened the doors to them, allowing them to enter. The priests were forced to lie face down in the back garden, while the soldiers searched the residence.

Finally, according to the Truth Commission, the soldiers fired a machine gun at the façade of the residence, as well as rockets and grenades. They allegedly left a cardboard indicating “FMLN executed those who informed on it. Victory or death, FMLN.”

On 12 January 1990, the Truth Commission submitted its report to the then President Cristiani. The report identified nine people as being responsible of the crimes: four officers and five soldiers. They were all arrested and brought to trial.

The trial by jury finally started on 26, 27 and 28 September 1991 before the Supreme Court of El Salvador. The jury had to decide only with respect to the charges of murder and acts of terrorism. The other charges were left to the judge to decide.

Colonel Guillermo Alfredo Benavides Moreno and Lieutenant Yusshy René Mendoza Vallecillos were found guilty of murder and of instigation and conspiracy to commit acts of terrorism. Mendoza was also found guilty of being an accessory. The judge gave them the maximum sentence, 30 years in prison.

Lieutenant Colonel Carlos Camilo Hernández Barahona were found guilty of being an accessory and sentenced to three years.

On 13 November 2008, the Spanish Association for Human Rights (APDHE) and the Centre for Justice and Accountability (CJA) filed a complaint before the Spanish National Court against former Salvadoran President Alfredo Cristiani Burkard and 14 former military officers and soldiers for their alleged roles in the killings of the 6 Jesuit Priests, their housekeeper and her daughter and the cover-up of these crimes.

On January 13, 2009, Judge Eloy Velasco, the judge of the Sixth Chamber of the Spanish National Court, formally charged 14 former officers with murder, crimes against humanity and state terrorism for their role in the massacre. Those indicted included including Colonel Ponce, former head of the Armed Forces at the time of the murders, General Rafael Humberto Larios, former Minister of Defence, Colonel Juan Orlando Zepeda, former Vice Minister of Defence, and Colonel Inocente Orlando Montano, former Vice Minister for Public Safety.

The extradition request from Spain for Ávalos Vargas, Zárpate Castillo, Pérez Vásquez and Benavides was denied on 18 August 2016. The Salvadoran Supreme Court decided that Benavides should nonetheless be held in prison in El Salvador to complete his 1991 sentenced.

As the amnesty law for war crimes committed during the civil war was struck down earlier in 2016, the accused could now be judged in El Salvador for their crimes.

In January 1932, a peasant revolt against the regime was crushed and 30’000 civil, mainly indigenous people, were massacred by the military. After this event, the Salvadoran military dominated the government, and the conflict between the left and the right wings became a feature of the country.

On 24 March 1980, Archbishop Romero who denounced the death squad slaughters and preached for justice was assassinated. On the day of his funerals, where 250’000 persons gathered in the cathedral in San Salvador, snipers attacked the crowd, killed 42 and wounded 200. This massacre triggered the civil war which will last for 12 years.

In December 1980, four American churchwomen were raped and murdered, allegedly by military and paramilitary forces. Despite these outrageous human rights violation, the US President Ronald Reagan, elected in 1980, reasserted his support to the Salvadoran military government.

The atrocity of the Jesuit Massacre in Novembre 1989 led to the creation of a special investigative task force by the US Congressman Joseph Moakley. Its findings revealed that the high command officers of the Salvadoran army had been responsible for the murders of the Jesuits.

The report also presented an international process to end the conflict and to reduce the US support to the rightwing Salvadoran government– which had reached approximately US$ 4 billion, including money, weapons and training in assistance to El Salvador’s military during the conflict.

It is estimated that 75’000 people died during the civil war, which ended with the signing of the Chapultepec Peace Agreements on 16 January 1992. An UN-backed Truth Commission was established to investigate the abuses committed since 1980. The Commission presented its final report on 15 March 1993, documenting thousands of killings, disappearances and torture. The experts named individuals allegedly responsible for human rights violations and attributed the overwhelming majority of the human rights abuses to the Salvadoran armed forces and the paramilitaries. The Commission set out a series of recommendations, calling for investigations to be carried out and for those responsible for human rights violations to be brought to justice.

On March 20, 1993, five days after the release of this report and recommendations, the Salvadoran Legislative Assembly adopted a blanket amnesty law, preventing prosecutions of wartime atrocities. In 1999, the Inter-American Commission considered that El Salvador’s amnesty law violated international law by foreclosing further investigation in the 1989 murders of six Jesuit priests and two women.

On 14 July 2016, the Constitutional Court judged that the 1993 amnesty law is unconstitutional and violates El Salvador’s international obligations under the American Convention on Human Rights and the Geneva Conventions. It also ruled that the statute of limitations does not apply to crimes against humanity. The ruling states that the government has an obligation to “investigate, identify and sanction the material and intellectual authors of human rights crimes and grave war crimes” and to provide reparations to victims.

The annulation of this blanket amnesty will hopefully lead to the investigation and prosecution of crimes against humanity and war crimes committed during the 12 years long civil war.

Switzerland
Facts Ousman Sonko was a member of the Gambian army under the regime of Yahya Jammeh, former President of the Republic...

Sri Lanka
facts In 2007, Major General Jagath Dias, was appointed as the General Officer commanding the 4 brigades of the 57th Di...

Guatemala
While Erwin Sperisen was Chief of the National Civil Police (PNC) in Guatemala, numerous crimes were committed by the s...
News releases 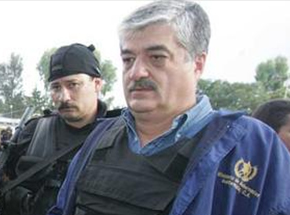