Manuel Antonio Callejas y Callejas is a retired Guatemalan military official and was the head of military intelligence at the Quetzaltenango military base in 1981. In 1986 Callejas y Callejas was appointed Deputy Chief of Staff of Guatemalan National Defense, and then Presidential chief of staff the following year. He has long been accused of involvement in organized crime, corruption, and drug trafficking.

During the Guatemalan civil war, the Molina Theissen family was actively opposed to military rule and was viewed as subversive by the security forces. Carlos Augusto Molina Palma – the father of the victims in the Molina Theissen case – was arrested and physically abused on numerous occasions between 1955 and 1960, and was exiled from Guatemala by the military regime. His teenage daughter, Emma Guadalupe Molina Theissen, was a member of the « Juventud Patriótica del Trabajo » (Patriotic Worker Youth), which was connected to the Guatemalan Labour Party. Military authorities arrested Emma and her boyfriend on 19 March 1976; Emma was raped and tortured while she was being detained, and her boyfriend was later murdered. On 27 September, 1981 Emma was again arrested, raped, and tortured by the military. She was illelgally detained for nine days, but she escaped from the Manuel Lisandro Barillas military base in Quetzaltenango on 5 October 1981.

On 6 October 1981, a day after Emma’s escape, three armed individuals dressed in civilian clothing came to the Molina Theissen family home in Guatemala City. Two of the individuals entered the home, beat Emma’s mother, and took her 14-year-old brother, Marco Antonio Molina Theissen, away in an official vehicle. Marco Antonio was never seen again. According to the Commission for Historical Clarification – Guatemala’s truth commission – the armed individuals were members of the military intelligence section and took Marco Antonio as retaliation for Emma’s escape and the family’s dissidence.

Guatemala has recognized its responsibility. On 6 January 2016 four ex-military officials were arrested in connection with the Molina Theissen case: Callejas y Callejas, Francisco Luis Gordillo Martínez, Edilberto Letona Linares, and Hugo Ramiro Zaldaña Rojas. They are accused of crimes against humanity, aggravated assault, and enforced disappearance of Marco Antonio Molina Theissen, and of sexual violence and torture of Emma Guadalupe Molina Theissen, and are being held in preventative detention.

The defendants denied the charges, and challenged the jurisdiction of the Fifth Criminal Court. The appeals have all been rejected to date.

At the end of May 2016 the Supreme Court of Justice granted an appeal by the Attorney-General’s Office requesting that the case be transferred from the Fifth Criminal Court to High Risk Court ”C” in Guatemala City.

On 1 March 2018, the trial of Callejas y Callejas and four other retired senior military officers began in the High Risk Court “C”.

The mother of Emma and Marco Antonio, Emma Theissen Alvarez de Molina, is a civil party to the proceedings.

Between 1960 and 1996, Guatemala was embroiled in a civil war that resulted in 250 000 victims (deaths and disappearances). The war ended following a peace signing on 29 December 1996.

The civil war, which would last for 36 years, began in 1960 when young defiant officials and countrymen revolted against the dictatorial regime. Until 1982, there were a series of military or pro military governments.

In 1978, General Fernándo Romeo Lucas García became the president of Guatemala. It was during his presidency that the first large-scale massacre against the Mayan population took place.

In 1982, General Efraín Ríos Montt took control following a coup d’état. He set up Civil Defense Patrols (PAC) made up of 900 000 militia who the army had recruited by force to fight against the guerrilla. He unleashed a scorched earth policy that included torture and forced disappearances. More than 45 000 people fled to Mexico where they stayed in refugee camps in Chiapas and Tabasco. In response, 6000 soldiers from the four main guerrilla groups (EGP, ORPA, FAR and PGT) unified to form the Guatemalan National Revolutionary Unity (URNG). From this point onwards, the conflict truly became a civil war.

Ríos Montt’s brief presidency (from 1982 to 1983) is considered to be the most violent period of the conflict. During this period, 440 Mayan villages were completely destroyed and 200 000 Mayan people were killed in attacks of extreme cruelty (such as; amputation, impalement and torture). Although the (left-wing) guerrilla forces and the (right-wing) death squads had committed summary executions, forced disappearances and had tortured civilians, the majority of human rights violations (93%) were committed by the Guatemalan army and by the PACs that it controlled.

In 1986, free elections were at last organised and were won by Vinicio Cerezo Arévalo of the Christian Democratic Party. It was not until 1996, however, that a peace agreement was signed between the government and the guerrilla, putting an end to a conflict that had lasted for 36 years.

THE COMMISSION FOR HISTORICAL CLARIFICATION (CEH)

In June 1994, the Oslo Accords ordered the creation of a truth commission called the Guatemalan “Commission for Historical Clarification”; its aim was to investigate human rights violations in relation to the armed conflict and to prepare a report covering these violations and their causes. The Commission also aimed to establish specific recommendations to “encourage national peace and harmony in Guatemala”. After having listened to thousands of accounts and having unearthed several clandestine burial sites, the Commission published a final report in February 1999, titled “Silent memories”.

In its report, the CEH accounted for 200 000 deaths, 50 000 disappearances, one million internally displaced refugees and more than 600 devastated communities. The majority of crimes (91%) were committed during the regimes of General Romes Lucas García (1978-1982) and General Efraín Ríos Montt (1982-1983).

The facts established by this report have been used on a number of occasions during the trials of perpetrators of human rights violations, particularly that of Felipe Cusanero Coj. A former paramilitary officer, he was the first person to be tried for the forced disappearances of civilians during the civil war.

The CEH was supported by another report, “Never again”, published on 24 April 1998 as part of the inter-diocese Recovery of Historical Memory project (REMHI).

THE INTERNATIONAL COMMISSION AGAINST IMPUNITY IN GUATEMALA (CICIG).

On 12 December 2006, an agreement signed between the United Nations and the Guatemalan government established the CICIG. It is an independent body that aims to assist the Guatemalan office of the prosecutor, the national police and other institutions involved in the investigation of sensitive cases, as well as working to dismantle illegal security groups. The CICIG has the right to initiate investigations proprio motu.

The CICIG’s investigations have led to the issuance of 18 arrest warrants, notably for Javier Figueroa and Erwin Sperisen. 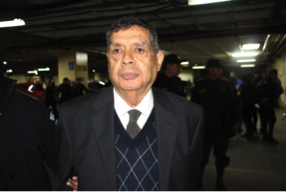 No return to The Gambia without legal proceedings for Yahya Jammeh

Gambia
Former Gambian President Yahya Jammeh seems to be preparing the ground for a return to The Gambia. TRIAL International r...

Former Yugoslavia
Radomir Radovan Šušnjar, known as Lalco, was born in 1955 in Bosnia Herzegovina. He worked as a delivery driver for a bakery in the city of Višegrad before the war started. Šušnjar is suspected of participating in what has been called the “live bonfire” (“Živa lomača”) the burning alive of...
Cases

Bosnia & Herzegovina
Radomir Šušnjar, otherwise known as “Lalco”, is accused by several Bosnian and Serbian witnesses of being involved in the murders of 59 Bosniaks, who were burnt alive in Visegrad during the conflict. In June 1992, approximately 70 people – mostly women, children and elderly persons – were...
News