TRIAL International reminds its visitors that any person charged by national or international authorities is presumed innocent until proven guilty.

Philip DeCamp, born in 1963 in Georgia, joined the US army in 1983. He obtained a Bachelor’s degree in physics in 1984, and a Ph.D. in industrial engineering. He was lieutenant colonel of the 3rd Infantry Division of the US army in Iraq when the alleged facts occurred. He retired from the Army in July 2005 and became adjunct mathematics professor in Virginia.

On the morning of 8 April 2003, Sergeant Shawn Gibson, the commander of a 3rd Infantry Division M-1 Abrams tank positioned on the Al-Jumhuriya Bridge in Bagdad fired on the Palestine Hotel, a base from where numerous foreign journalists covered the Iraq war. Jose Couso, a cameraman for the Spanish network Telecinco, and Taras Protsyuk, a Ukrainian cameraman for Reuters, were killed after the tank fired the high-explosive shell at the Palestine Hotel. DeCamp headed the regiment in charge of the tank which attacked the building.

A U.S. military investigation in August 2003 cleared DeCamp and the other two soldiers, Sergeant Shawn Gibson and Captain Philip Wolford, of wrongdoing, saying they acted properly because they believed they were firing on enemy troops.

Yet, another investigation from the Committee to Protect Journalists underlined that no evidence was found of enemy shot coming from the Palestine Hotel. However, this investigation concluded to the non-intentionality of the crimes.

In late 2003, the Spanish National Court (Audiencia Nacional, Sala de lo penal), acting on a request from Couso’s family, opened an investigation against Sergeant Gibson, Captain Wolford and Lieutenant Colonel DeCamp and on 19 October 2005, three international arrest warrants were issued. The US Department of Justice denied a Spanish request to question the three American soldiers on American territory.

The case was closed a first time on March 2006. In December 2006, the Audiencia Nacional granted an appeal by the killed journalist’s family against the closure of proceedings. DeCamp, Gibson and Wolford were indicted on 27 April 2007 on charges of homicide and war crime. Yet, on 14 July 2009, the Spanish National Court decided to close the case due to lack of evidence.

On 13 July 2010, the Spanish Supreme Court ordered to reopen the investigation and on 4 October 2011 Judge Pedraz indicted once again Gibson, Wolford and DeCamp on charges of war crime. The Judge ordered each of them to post a bail of 1 million Euros as a guarantee for the reparation proceedings. In the same decision the Judge ordered to open an investigation for command responsibility against General Buford Blount and Colonel David Perkins, hierarchic superiors of Lieutenant Colonel DeCamp.

On 5 June 2014 the criminal chamber of the Spanish national Court ruled that the investigation could be pursued, despite the new legislation on universal jurisdiction of 2014. Yet, on 9 June 2015, this decision was annulled and the case closed. The decision to close the case was confirmed by the Criminal Chamber of National Court on 25 November 2015, then, on appeal, by the Supreme Court on 25 October 2016, both stating that the case could be reopened if the new procedural requirements were met (if the suspects came to Spanish territory, for example).

In the end of October 2016, the family of José Couso has announced its intention to bring the matter before the European Court of Human Rights (ECtHR).

The Iraqi special tribunal is a hybrid tribunal created on the 10th December 2003 in Bagdad by the coalition provisional authorities which were government established after the invasion of Iraq in 2003. The mission of this tribunal is to judge acts of genocide and crimes against humanity as well as war crimes committed between 17 July 1968 and the 1st May 2003, the period covering the political regime of the Baas party. It is therefore aimed specifically at crimes committed by Iraqis in the aforementioned period notably those committed during the war against Iran (1980 – 1988) and the invasion of Kuwait (1990-1991).

The Iraqi special tribunal was created in the context of the Iraq war (also known as the Gulf war) that began on the 20th March 2003 by operation “Iraqi Freedom.” The operation involved the invasion of Iraq by the coalition. It was conducted by the United States, the United Kingdom and the international coalition in order to overthrow the Baas party of Saddam Hussain. The Baas party originating in Damascus in 1947 came to power in Iraq in 1963 but it was only due to a coup of 17th July 1968 that it definitively seized power until 2003. When Saddam Hussein came to power on the 16th July 1979 the party changed significantly and militarised itself. By organising itself into various cells throughout the country the party became strongly resistant in the face of hardship. The United States have been the leaders of the war in Iraq and many reasons for the war have been officially cited by the government of G.W Bush; the fight against terrorism, the elimination of weapons of mass destruction that Iraq was supposed to hold; the arrest of Saddam Hussein, to mention only the main ones. After a rapid defeat of the Iraqi army at the end of April 2003 and the capture of Saddam Hussein, the coalition and Iraq tried to establish a transitional democratic government representing all the Iraqi communities. The coalition also aimed to try members of the Baas party that had been captured.

In close collaboration with the American department of justice to which he reports directly, Paul Bremer, (Iraqi second civil administrator) established by decree the statute of the Special Iraqi tribunal on the 10th December 2003. The United States have awarded more than $100 million to ensure the “construction of the courtroom, conduct exhumations, study the documents seized, the preparation of evidence and the training of the tribunal’s members”.

The statute of the tribunal is a mix of two existing forms of procedure, inspired strongly by American adversarial law as well as Egyptian law which is essentially inquisitorial. If the statute is deemed to be insufficient it explicitly states that the Iraqi penal code of 1971 is to be used. The statute of the tribunal introduced alongside the Iraqi penal legislation a number of crimes taken from statutes of other international criminal courts in order to incriminate the former dictator Saddam Hussein and other members of the regime, namely genocide, crimes against humanity and war crimes. Furthermore, each time that one of these crimes does not have a corresponding match in the Iraqi penal order, the statute authorises the tribunal judges themselves to determine the sentence taking into account the gravity of the crime, the individual characteristics of the accused and international jurisprudence. With regards to its composition, the Iraqi special tribunal consists of 20 attorneys contracted for 3 years, 3 chambers composed of 9 permanent judges appointed for 5 years, a court of appeal composing of 9 judges and 20 judges appointed for 3 years. It is formed solely of Iraqi judges of which a certain number have denounced from the beginning the pressure exerted by the provisional government. Some judges have been the victims of threats, of removal and even of assassination.

Whilst being discredited from the beginning as rendering winners justice, the Iraqi special tribunal had the means to quickly realise its central objective, that of judging the ex head of state Saddam Hussein as well as the main representatives of the Baas regime. In addition to genocide, crimes against humanity and war crimes, the tribunal also had jurisdiction to try cases relating to the manipulation of judges, squandering national resources and the use of the Iraqi army against another Arab state. All of these charges were on the indictment for the first trial.

The first trial which took place in front of the tribunal was the trial of Saddam Hussein judged alongside seven of his lieutenants on the 19th October 2003. There were doubts concerning the fairness of the trial in regard to the conditions under which the trial began. Several Human Rights organisations one being Human Rights Watch have condemned technical and financial limits placed on the defence which risked hindering their work in comparison with the support received by the prosecution. Another issue which was the subject of controversy was the re-establishment of the death penalty on the 30th June 2004, which was abolished in 2003 by Paul Bremer. Despite the position today in international law being clearly abolitionist, several death sentences were passed early on culminating with the hanging of Saddam Hussein in December 2006 which was voluntarily made public. After said hanging the tribunal has continued and continues today to prosecute the former members of the Baas government.

At present, the Iraqi special tribunal is still evolving in the context of a political crises and repeated attacks. The execution on 25 January 2010 of “Chemical Ali”, Saddam Hussein’s cousin seems to have revived the movements against religious minorities present in Iraq.

Democratic Republic of the Congo
Geneva/Goma, 23 November 2020. For immediate release. Two years almost to the day after its opening, the case against t...

Sheka trial in DRC: what support is envisaged for the 290 victims?

Democratic Republic of the Congo
On 1 March 2019, a new chapter opened in the Sheka trial: the victims of this warlord, who has terrorized North Kivu, st...

How the mighty fall: Trial of Sheka and consorts in DRC

Democratic Republic of the Congo
Goma/Geneva, 20 November 2020 - for immediate release. The verdict is nearing for the warlord Ntabo Ntaberi, better know...

Bosnia & Herzegovina
Exactly 25 years ago, on 21 November 1995, the Dayton Peace Agreement put an end to the war in Bosnia and Herzegovina. I...

DRC must pay off its debt to victims of mass crimes

Bosnia & Herzegovina
On 15 September 2020, the House of Representatives of the Parliamentary Assembly of Bosnia and Herzegovina (BiH) has ado...

Bosnia & Herzegovina
Late July 2020, the United Nations Human Rights Committee pronounced on a series of remarks made by TRIAL International...

Democratic Republic of the Congo
The case of seven women whose rapists were convicted in 2011 epitomizes the gap between a guilty verdict and truly satis...
News

Democratic Republic of the Congo
In order to reach out to the most isolated populations, many Congolese organizations do not hesitate to enter the heart...

Tibet
facts From 1992 to 2001, Chen Kuyian was the first secretary for the Chinese Communist Party (CCP) in Tibet. This post...
View All
©2020 trialinternational.org | All rights reserved | Disclaimer | Statutes | Designed and Produced by ACW 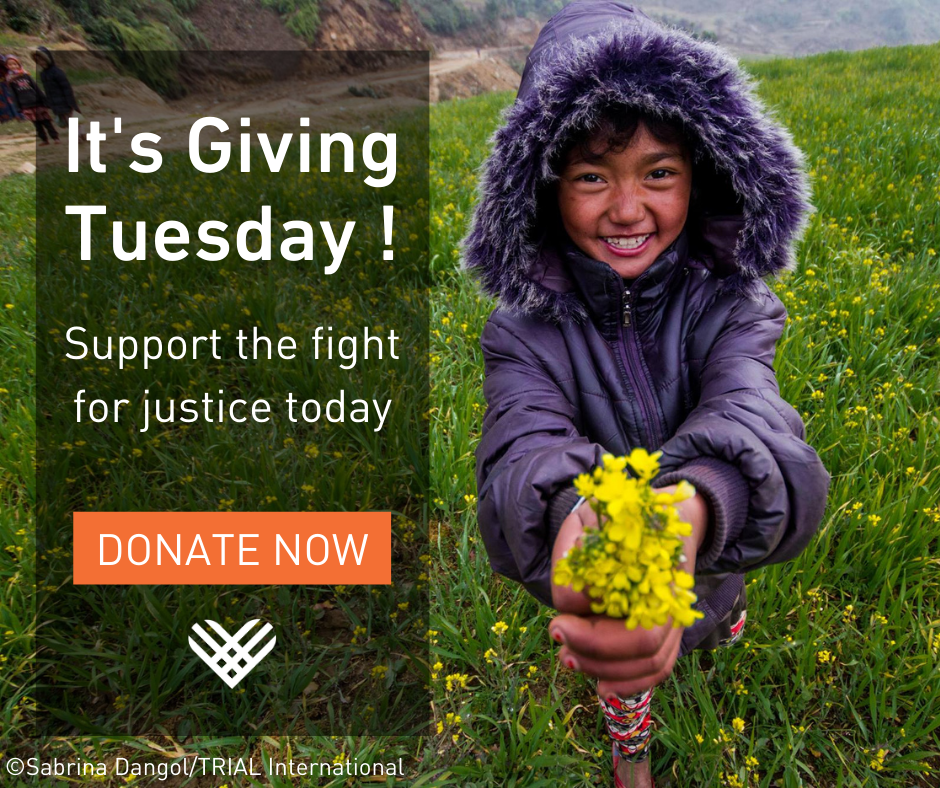