Teodoro Nguema Obiang was born on 25 of June 1969. He is the son of Equatorial Guinea’s President and the current Vice President.

Between 2000 and 2011, Teodoro Nguema Obiang allegedly spent more than 300 million Euros around the world on properties, cars and luxury goods. His patrimony includes a private mansion avenue Foch in Paris for 25 million euros decorated with more than 40 million euros of furniture, eighteen luxury cars, a jet, two yachts, art work, jewelry and luxury goods. His fortune is unrelated to his yearly known income of 80’000 euro as a Vice-President.

Teodoro Nguema Obiang was suspected to have misused corporate assets and public funds to acquire all these goods.

In September 2011 and in February 2012, the investigating judges seized more than 15 luxury cars owned by Teodoro Nguema Obiang as well as luxury goods, such as fine wine and art work.

On 11 July 2012, an international arrest warrant against Teodorin Nguema Obiang was circulated.

In 5 September 2016, the French judges referred the case to the Paris Tribunal.

On 27 October 2017, the Paris Tribunal (Tribunal correctionnel de Paris) found Teodoro Nguema Obiang guilty of laundering of funds originating from the misuse of corporate assets, laundering of embezzled public funds, laundering of breach of trust, and laundering of bribery committed on French soil from 1997 to 2011 for an estimated amount of 150 millions euros.

Procedure in the USA

On 10 October 2014, the US Department of Justice agreed to a settlement following accusations that Teodoro Nguema Obiang used his position of power to collect more than 300 million dollars in the United States through corruption and money laundering.

This settlement forces Nguema Obiang to relinquish assets worth an estimated 30 million dollars, and prevents him from hiding other stolen money in the United States.

On 31 October 2015, the Geneva Prosecutor opened investigations against Teodoro Nguema Obiang for money laundering and ordered the seizure of 11 vehicles. In July 2017, the Federal Tribunal confirmed the seizure of the luxury cars. 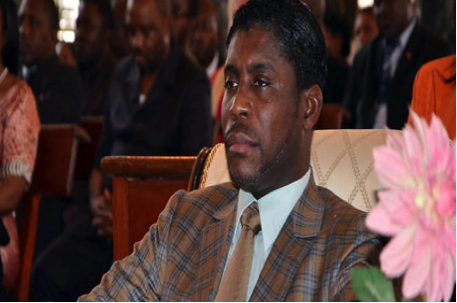 Former Yugoslavia
Radomir Radovan Šušnjar, known as Lalco, was born in 1955 in Bosnia Herzegovina. He worked as a delivery driver for a bakery in the city of Višegrad before the war started. Šušnjar is suspected of participating in what has been called the “live bonfire” (“Živa lomača”) the burning alive of...
Trial Watch database

Syria
On 17 February 2013, the Canadian national Carl Campeau, who had been working as a legal adviser to the UN forces (UNDOF) in the Golan Heights, was abducted and detained near Damascus. The abduction was allegedly committed by the terrorist organization Jabhat al-Nusra, the al-Qaeda-linked ...
Trial Watch database

Democratic Republic of the Congo
Bosco Ntaganda was born on 5 November 1973 in Rwanda and later obtained Congolese citizenship. Throughout his life he fo...

Rwanda
Emmanuel Nteziryayo was born in 1963. He is a former mayor of the commune of Mudasomwa in Gikongoro province in Rwanda....