The Federal Criminal Court (FCC) released today a landmark decision in the case of Khaled Nezzar, an Algerian former defence minister denounced by TRIAL for war crimes. The FCC found that Mr. Nezzar cannot claim immunity for acts committed during his tenure, thus paving the way for a trial in Switzerland. The present decision opens up significant possibilities in the fight against impunity based on the principle of universal jurisdiction.

Mr. Khaled Nezzar, former General, Minister of Defence and member of the Algerian military junta in power in the early 1990s, was arrested in Geneva on October 20, 2011 following a denunciation by TRIAL (Swiss Association against Impunity) and a complaint of two victims, accusing him of war crimes committed during the early years of the Algerian civil war (1992-2000). Heard during two days by the Public Ministry of the Confederation, he was released upon his promise to participate in the subsequent procedure.

The criminal investigation, which continued in the presence of Mr. Nezzar’s counsel, was however suspended last January, following an appeal by Mr. Nezzar challenging the proceedings against him. In the appeal submitted to the FCC, Mr. Nezzar argued that his position as Minister of Defence and member of the junta at the time protected him from a possible criminal prosecution in Switzerland.

These arguments did not convince the federal judges. The FCC indeed took the view that one could not possibly invoke immunity for crimes of such a serious nature that they could amount to international crimes, notably war crimes in the present case.

The FCC held that “it would be both contradictory and futile to, on the one hand, fight against these gross violations to the most fundamental human values and, on the other hand, to accept a large interpretation of the immunity rules […]”.

According to Philip Grant, director of TRIAL, “this decision sets a ground-breaking precedent that will have a significant impact beyond our borders and gives a very strong signal to executioners: in the future, they can no longer hide behind their official position to commit atrocities.”

The investigation will now continue, with the possibility for parties to call new witnesses to the stand. A war crimes trial might eventually take place in Switzerland against Mr. Nezzar.

Mr. Nezzar held various management positions. Chief of Army in 1986, he was promoted to Chief of Staff and Minister of Defence in 1990. With this position, he became the man of all decisions within the government. From 1992 to 1994, at the beginning of the “dirty war”, he was one of the five members of the High Council of State (HCS), military junta replacing the elected president. In this respect, several human rights organisations accuse him of having ordered, authorised and encouraged the military and public servants to engage in acts of torture, commit extrajudicial killings, enforced disappearances and other acts constituting serious violations of international humanitarian law.

Swiss law allows for the prosecution of certain international law violations, including violations to the Geneva Conventions, as long as the suspect is present on Swiss territory. In the past, a Rwandan national has been sentenced in Switzerland to 14 years in prison for his participation in the Rwandan genocide. 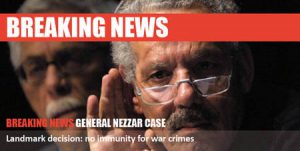 Bosnia & Herzegovina
Radomir Šušnjar, otherwise known as “Lalco”, is accused by several Bosnian and Serbian witnesses of being involved in th...
Reports and publications

Sri Lanka
In 2008-2009, Mr Dias was the Major General of the 57th Division of the Sri Lankan army, tasked with attacking the Tamil...
View All
©2020 trialinternational.org | All rights reserved | Disclaimer | Statutes | Designed and Produced by ACW