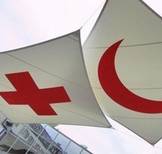 How much do you know about the Geneva Conventions.

Would you qualifiy to be an ICRC delegate? Would you be accepted as prosecutor in an international court? Or, on the contrary, are Slobodan Milosevic or Charles Taylor your role models???

China
facts Qi Liu was born in November 1942, in Wujin, Jiangsu Province (China). An engineer, he graduated from the metallur...

Nepal
Facts Kumar Lama was recruited into the Nepalese Army as a combat engineer in 1986. During the Nepalese civil war he wa...