TRIAL International and the Open Society Justice Initiative (OSJI) welcome the opening of a formal criminal investigation by the Office of the Attorney General of Switzerland into Chris Huber, a Swiss national active in the mining sector. Huber is suspected of having committed pillage in the Democratic Republic of the Congo, a war crime under Swiss law. Both organizations had been investigating the case since 2013, and had filed a criminal complaint (dénonciation pénale), backed by numerous pieces of first-hand evidence, in November 2016.

The Office of the Attorney General (OAG) has now confirmed having opened criminal proceedings against Swiss businessman Christoph Huber, Bloomberg revealed today. The OAG is investigating the alleged illegal trade of minerals in Democratic Republic of the Congo (DRC) during the armed conflicts of the Second Congo War (1998-2003), following the TRIAL International/OSJI dénonciation.

“Our investigations unveiled corporate documents, as well as internal paperwork belonging to the RCD Goma, which demonstrate Chris Huber’s business dealings with the armed group”, said Bénédict De Moerloose, “At a time when the public increasingly demands of corporate actors that they respect and protect human rights, the opening of an investigation into a Western businessman conducting illegal trade in a conflict zone sends a strong signal to the whole mining sector”.

According to Ken Hurwitz, head of the Open Society Justice Initiative’s Anticorruption program, “Too many conflicts around the world are fueled by the illegal sale of pillaged resources into global markets. Yet the international businesses and business people involved are rarely, if ever, prosecuted. The Swiss are to be applauded for taking on the hard work of pursuing this complex and important case.”

IN BED WITH A VIOLENT ARMED GROUP

Among other material, the organizations uncovered that the 52-year old Huber was in a direct business relationship with the RCD-Goma, a violent armed group controlling a large portion of Eastern Congo during the Second Congo War. If Huber is found to have illegally exploited and appropriated natural resources from a conflict zone, he could be held accountable for the war crime of pillage, a crime prohibited by international humanitarian law, and punishable by Swiss law by a prison sentence of not less than three years.

In 2001, the company represented by Huber was granted a mining concession by RCD Goma, which included guarantees of protection by soldiers of the armed group, although the RCD-Goma was not the owner of the mines. The concessions did not last long, but he was still able to acquire tons of cassiterite and wolframite during the time when he held concessions. Beforehand, Huber had already been involved in the trade of minerals from the region at least since 1997, including with Swiss companies.

Both organizations call upon the OAG to promptly complete its investigation.

Holding a trial would constitute a historical precedent. Indeed, since the aftermath of the Second World War, it seems that no corporate actor has ever been found guilty of pillage, although this practice, in particular the looting of raw materials in conflict zones, has in the past decades reached alarming proportions. 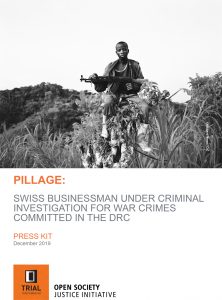 UJAR 2021: the impact of coronavirus on universal jurisdiction

Global
The year 2020 will remain in memories, by and large, as a period unlike any other. The covid-19 pandemic has turned arou...

Democratic Republic of the Congo
Geneva, April 21, 2022. On Tuesday, the Kananga garrison military court delivered its verdict in the...