Westwood: Dealing in Conflict timber across The Gambia and Senegal

Between 2014 and 2017, The Gambia exported nearly 163 million US dollars-worth of rosewood, a rare and precious tree species, to China. During this time, Westwood, a Gambian company allegedly owned by Swiss national Nicolae Bogdan Buzaianu and former Gambian President Jammeh, had the exclusive license to export rosewood. The timber it exported was illegally felled in neighboring Casamance where the separatist armed group has been fighting the Senegalese army for decades. TRIAL International filed a criminal complaint with the Swiss Office of the Attorney General against Mr. Buzaianu accusing him of having pillaged conflict timber.

According to the criminal complaint (dénonciation pénale) filed by TRIAL International, Swiss businessman Nicolae Bogdan Buzaianu’s company was involved in the pillaging of precious rosewood from Casamance between 2014 and 2017. During this period, Westwood Company Ltd – which TRIAL International alleges Mr. Buzaianu co-founded with former Gambian President Yahya Jammeh – had a monopoly on the export of rosewood, a precious tropical wood from The Gambia. But with Gambian rosewood nearly depleted since 2011, most of the timber was actually imported from Casamance, a region in southern Senegal that borders The Gambia. For several decades, large areas of this region have been under the control of the separatist armed group, the Mouvement des forces démocratiques de Casamance (MFDC).

‘Exploiting natural resources from a conflict zone is a war crime that must be punished. Without the pillaging of natural resources, many armed groups would have no means of financing their wars’, said Montse Ferrer, Senior Legal Advisor and Corporate Accountability Coordinator at TRIAL International. ‘Despite numerous documented cases of pillage, not a single conviction against corporate actors has been made since the end of World War II.’

TRIAL International filed a criminal complaint for pillage against Mr. Buzaianu in Switzerland with the Office of the Attorney General (OAG) in June 2019. ‘We have waited until today to go public because we wanted to give the Swiss prosecutorial authorities sufficient time to review the evidence and take decisive action against Mr. Buzaianu. We are hopeful that these steps have been taken and that the OAG is investigating the matter’, she added.

LOGGING THAT BENEFITS AN ARMED GROUP

Some estimates suggest that Senegal loses the equivalent of 40,000 hectares of forest per year, several dozen hectares of which are lost due to the illegal exploitation of rosewood in Casamance. This selective deforestation has led to a decrease in rainfall and increased desertification in the region. It has also led to conflicts between rebels and communities who can no longer use the forests for sustainable livelihoods.

Illegal logging of precious woods is problematic, as it undermines reforestation efforts in the region. According to the International Institute for Environment and Development (IIED), “in the village of Koudioube, the restoration of the community forest has helped to overcome conflicts.” Illegal logging has stopped, fruits and wildlife are abundant, and local people are once again able to sell forest products. Communities that used to fight each other are now working together.

A large share of the trafficking and logging has been taking place directly in the territory controlled by the MFDC for almost thirty years. ‘Westwood’s illegal activity is all the more serious because it contributed to an illegal timber trade that has historically financed the MFDC. Equally striking is that this trade has had such a negative impact on the lives of local people contributing directly to the deforestation of the region’, said Jennifer Triscone, Legal Advisor at TRIAL International. The armed group exercises de facto control over the precious wood industry by issuing logging authorizations and transport permits, and by ensuring the security of the latter. The rebels also illegally exploit and sell precious hardwood timber to finance their armed struggle: an illegal trade fuelled by demand from the global tropical hardwood market. 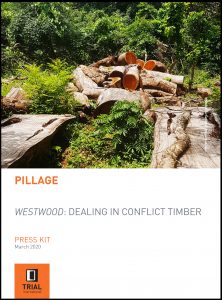 Syria
On the 13th of December 2013, alerted of his presence in Switzerland, TRIAL International filed a criminal denunciation...

Algeria
Khaled Nezzar was the Minister of Defense in Algeria and a member of the High Council of State. In addition, he was cons...
Universal jurisdiction database

Sudan
Facts Lundin Petroleum is a Swedish oil company founded in 2001. It is one of Europe’s largest independent oil companie...
View All
©2023 trialinternational.org | All rights reserved | Privacy Policy | Statutes | Designed and Produced by ACW
We use cookies to ensure that we give you the best browsing experience on our website. If you continue to use this site we will assume that you are happy with it.OkPrivacy