Complaint at the International Olympic Committee

Complaint before Ethics Commission of the International Olympic Committee 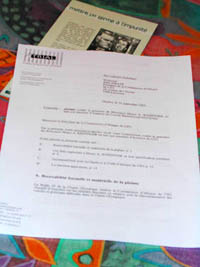 On the 11 September 2003, the TRIAL association, member of the Kissinger Out! campaign, filed a complaint with the Ethics Commission of the International Olympic Committee (IOC), requesting that Mr. Henry Kissinger be divested of the title of honorary member of the IOC.

Mr. Henry Kissinger stands accused of having been involved in acts incompatible with the ethical standards of the IOC, an organisation which promotes peace, cross-cultural understanding and the respect of human dignity.

The complaint filed reproached Mr. Kissinger for his participation in criminal acts in Chili, Vietnam, Laos, Cambodia and East Timor.

The request that Mr. Kissinger be excluded from the IOC is the first stage in an international campaign which will shortly be demanding the revocation of the Nobel Peace Prize awarded to Mr. Henry Kissinger in 1973, as well as his exclusion from the UNESCO Félix Houphouët-Boigny Peace Prize jury.

The Gambia
Major Advance for Victims of Abuses During Yahya Jammeh Rule (Berlin and Geneva, 03.03.2022) – The indictment in German...

Democratic Republic of the Congo
The case of seven women whose rapists were convicted in 2011 epitomizes the gap between a guilty verdict and truly satis...
View All
©2022 trialinternational.org | All rights reserved | Privacy Policy | Statutes | Designed and Produced by ACW