In July 2011, TRIAL submitted an individual communication to the United Nations Human Rights Committee regarding the arbitrary deprivation of liberty and torture of Mr. Ang Dorje Sherpa in July 2007. 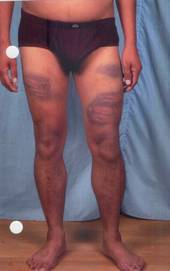 Mr. Sherpa was a porter and cook during trekking expeditions in the Nepalese mountains. On 18 July 2007 as he was walking back home, Mr. Sherpa was assaulted by a group of police officers who arrested him without producing a warrant or informing him of the grounds for his arrest. Mr. Sherpa was then beaten and dragged by his arms and hair to the Jorpati Police Bit where he was again severely beaten by the police officers with a bamboo stick until he fell unconscious. Mr. Sherpa was neither informed of his rights nor given the opportunity to contact his family, legal counsellor or friends. Subsequently, Mr. Sherpa was transferred in a state of semi-consciousness to the Metropolitan Police Circle Boudha where he was kept in inhuman conditions of detention. Namely, he was placed in an overcrowded room, endowed with no mattresses and no toilet facilities. Neither food nor water was provided to him. Despite a report by the visiting doctor clearly pointing out the need for Mr. Sherpa to receive medical attention for the grave injuries he presented as a result of the beatings he had suffered, he was not afforded any medical care. Mr. Sherpa was finally released the following day, 19 July 2007 at 18h00. He was never accused or charged of anything. Upon release Mr. Sherpa was threatened not to seek redress before the justice system as otherwise he would be “punished”.

Despite the threats, Mr. Sherpa filed a complaint before the Kathmandu District Court, which on 7 July 2008 rendered a decision recognising that torture had been inflicted by Officer Min Bahadur Khadkha on Mr. Sherpa and providing for compensation of 280 USD from the Nepalese Government, but deeming that further action against the perpetrator was not necessary. Mr. Sherpa then filed an appeal claiming that no effective disciplinary action had been taken against his perpetrator and that the compensation was not proportionate to the seriousness of acts committed. On 19 June 2009, the appeal court upheld the Kathmandu District Court’s decision. Similarly, on 12 October 2009 the Supreme Court upheld the decision of the previous courts and refused to review the case. Meanwhile, Min Bahadur Khadkha was awarded a promotion and Mr. Sherpa and his family have been subjected to multiple threats and harassment by both police and private agents.

In July 2011, TRIAL submitted an individual communication to the United Nations Human Rights Committee asking it to recognise that Nepal violated numerous articles of the International Covenant on Civil and Political Rights due to Mr. Sherpa’s arbitrary deprivation of liberty, torture, inhumane conditions in custody and to the consequent interference with his family life that such acts have represented. TRIAL also asked the Committee to request Nepal to inter alia:

adopt interim measures to investigate alleged instances of threats or harassment directed against Mr. Sherpa or his family and to guarantee their safety;

On 4 August 2011, the Human Rights Committee accepted the request for interim measures and requested the Government of Nepal to adopt all necessary measures to protect the life, safety and personal integrity of the author.

During the decade-long conflict between the Communist party of Nepal (Maoist) and the Royal Nepalese Army human rights violations were committed both by State agents and Maoists. The end of the conflict in 2006 with the signature of the Comprehensive Peace Agreement opened a period of transitional justice, providing for the commitment towards the implementation and protection of human rights in line with the international standards. However, most of the clauses of the agreement have not been implemented. Neither has a definitive Constitution been adopted. Although the interim Constitution prohibits the use of torture, it is neither criminalized nor sanctioned under Nepalese legislation. In April 2007 the United Nations Committee against Torture expressed grave concern about “the widespread use of torture and ill-treatment by law-enforcement personnel, and in particular the Royal Nepalese Army (RNA), the Armed Police Force and the Police”. In 2010, the Special Rapporteur on Torture pointed out that in Nepal “impunity for acts of torture is the rule, and consequently victims of torture and their families are left without recourse to adequate justice, compensation and rehabilitation”. In this sense, Mr. Sherpa’s arbitrary detention and torture occurs not as an isolated event, but rather within the general framework of impunity, in particular with regard to torture in Nepal.

On 6 November 2015 the UN Human Rights Committee issued a decision  on the case, finding Nepal responsible for the violation of several provisions of theInternational Covenant on Civil and Political Rights, including the prohibition of torture, the right to liberty and security, the right of all persons deprived of their liberty to be treated with dignity, and the right to family life with regard to Mr. Ang Dorje Sherpa. The Committee declared that the State is responsible for Mr. Sherpa’s arbitrary arrest and detention and the subsequent torture and the inhumane conditions of detention to which he has been subjected, as well as for unlawful interferences in Mr. Sherpa’s privacy, family life and home. Moreover, the Committee considered that Nepal failed to conduct a thorough and effective investigation into the crimes committed against Mr. Sherpa and to identify, prosecute and sanction those responsible.

The Committee requested Nepal to: