Virtual exhibition: “The Duty to Remember”

Remembrance is an essential step in the transitional justice process. With this in mind, the NGO ANEKED has created “The Duty to Remember”, a memorial intended to offer a space in which the relatives of the victims of Yahya Jammeh’s regime in The Gambia can mourn, remember and reflect. But before installing it permanently, it has been exhibited in Banjul in the spring of 2020, and will be on display in Geneva on the occasion of  Human Rights Week, starting on 23 November 2020.

The exhibition “The Duty to Remember” features photographs, testimonies from the Truth, Reconciliation and Reparations Commission (TRRC), as well as objects that once belonged to victims of enforced disappearances and extrajudicial killings in The Gambia. It was initially to be held on the University of Geneva’s premises, but the sanitary situation forced the organizers to transform it into a completely dematerialized exhibition.

From 23 November 2020, visitors will be able to navigate through a virtual space, entirely modeled in 3 dimensions. This will enable them to immerse into two series of portraits: “Victims and Resisters”, created by photographers Jason Florio and Helen Jones-Florio, and the images produced by Gambian photographer Muhamadou Mughtarr Bittaye, as well as the objects collected from the victims’ families – also modelled in 3D.

In addition, ANEKED (African network against extrajudicial killings and enforced disappearances) will be organizing several events during Human Rights Week. These include seminars, guided tours for high school students, the screening of the documentary “I Cannot Bury My Father” and workshops.

TRIAL International is very pleased to be among ANEKED’s partners and to contribute to making the exhibition a reality, thanks in large part to the financial support of the European Union. TRIAL International will be speaking during the first seminar (upon registration) on the role of Switzerland in the use of universal jurisdiction, on 23 November 2020 at 6:30 pm. 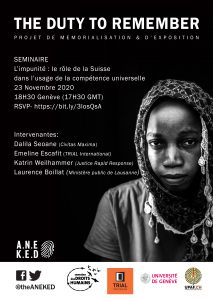 This project is funded by the European Union