Bosnia and Herzegovina: negationism has no place in the public sphere

The denial of genocide, the Holocaust, crimes against humanity and war crimes is used by a growing portion of the political class in Bosnia and Herzegovina (BiH). It is time to adopt a regulation to prohibit this kind of discourse in the public sphere. TRIAL International and ForumZFD open the debate with their new report, presented in Sarajevo on 25 February 2020.

In BiH, it is common for war crimes to be denied, minimised or even justified in public discourse. Perpetrators – even those who have been convicted – are publicly glorified without any punishment. Nationalist rhetorics glorifying these crimes and their perpetrators is more widespread than ever and now dominate the public discourse. So much so that some leading political elites openly dare to support them.

Negationism is not a fatality

ForumZFD and TRIAL International are convinced that hate speech has no place in the public sphere, and that a legal framework should prohibit Holocaust denial. The two organisations are publishing Calling War Atrocities by their Right Name, a report that hopes to initiate a dialogue on the importance of regulating public speech on the most serious crimes. A round table discussion with the author of the report, representatives of the Sarajevo Faculty of Law, associations and the Director of the Balkan Investigative Reporting Network brought together over 100 people on 25 February 2020.

“ForumZFD and TRIAL International draw attention to these occurences, which  unfortunately happen every day in our society. They wish to encourage a constructive conversation on this topic. Public discourse must change radically”, said Selma Korjenić, Head of the TRIAL International office in BiH. In November last year, she had addressed the United Nations Security Council on this issue.

No impunity for hate speech

Legislation prohibiting and sanctioning denial of genocide, the Holocaust, crimes against humanity and war crimes would fight an entrenched culture of impunity.

“We sincerely believe that every society should face its past, however painful it may be. However, it is not enough, since even when war crimes are being tried in court, they are denied in public. That is how the conflict continues” said Judith Brand, Director of the forumZFD in BiH. She added that parallel work in the fields of education, culture, media and activism is the basis for the process of adequately addressing this issue. 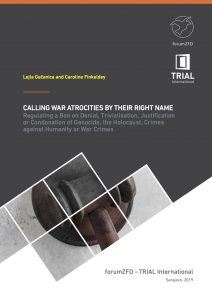 PDF
New report: "Calling War Atrocities by their Right Name"
Sign up to our newsletter
Donate

France
Facts Laurent Bucyibaruta was born in 1944 in Rwandan prefecture called Gikongoro. He became the prefect of Gikongoro o...

Rwanda
Facts Eugène Rwamucyo is a Rwandan citizen. He was the head of the Center of Public Health of the University of...
Universal jurisdiction database

Rwanda
Facts Célestin Mutabaruka was born in Rwanda in 1956. He became an ordained Pentecostal pastor. A member of the Hutu...

United Kingdom
Facts Célestin Ugirashebuja was born in 1953. He is the former mayor of Kigona and member of the National Revolutionary...

Germany
FACTS In August 2014, Jennifer W. left Germany for Iraq and joined ISIS there. In the period between June and September...
Universal jurisdiction database

Rwanda
Facts Claude Muhayimana was born in 1961 and is a French citizen of Rwandan origin. He obtained French citizenship in 2...