Human Rights defenders from Burundi file cases to the UN

On December 11, 2013, TRIAL completed its first training program in Burundi on how to submit individual complaints before the UN treaty bodies. The eight lawyers and Human Rights defenders who graduated from this 15-month long training received their training diploma during an event organised in their honour with the support of the Human Rights and Justice Section of the United Nation Office in Burundi (BNUB).

This practical and demanding training began in June 2012, and enabled participants to develop a keen understanding of the various procedures before the UN bodies dealing with Human Rights protection. These Human Rights defenders prepared and drafted real cases concerning 24 victims for submission before the UN Committee against Torture and the UN Working Group on Arbitrary Detention. 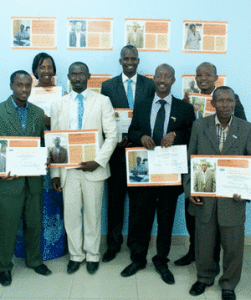 It is the first time ever that lawyers and Human Rights defenders from Burundi undertake legal proceedings before UN bodies. Backed by their knowledge of these procedures, they now represent the new legal forefront of those taking up the defence of victims of human rights violations.

Attorney Janvier Bigirimana, one of the training graduates, explained that “this training essentially contributed to strengthen national capacity to give Burundi new impetus in the fight against human rights violations.”

Orlane Varesano, TRIAL legal advisor in charge of TRIAL’s Burundi program declared: “this training represented a unique opportunity to convey expertise in victims’ defence through a practical and dynamic approach. The program required a significant commitment on the part of TRIAL but it was really needed. The encouraging results have prompted us to continue our efforts in this direction.”

The President of the Independent National Commission on Human Rights (CNIDH), the Representative of the UN High Commissioner for Human Rights in Burundi and Head of the Human Rights Section of the Justice from the BNUB – who opened the ceremony – the representatives of the diplomatic corps but also members of the Burundian civil society were all present to greet the participants’ successful involvement in the training program in the fight against impunity of serious human rights violations.

Democratic Republic of the Congo
Access to justice is more crucial than ever to ease the existing tensions in the North and South Kivu provinces of the D...